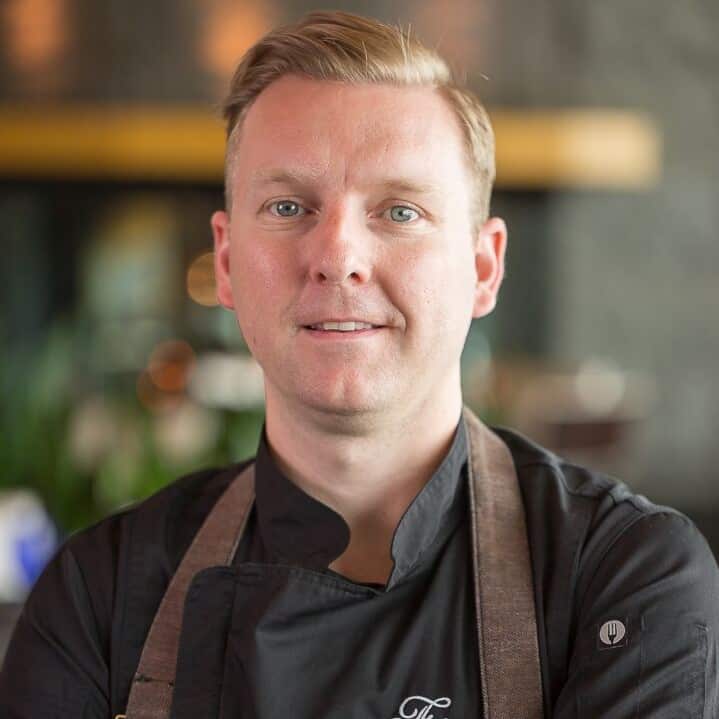 Colin Burslem-Notch8 Restaurant and Bar
A Vancouver local with extensive Pacific Northwest culinary experience, Colin Burslem is naturally at
home at The Fairmont Hotel Vancouver. as Executive Chef, Burslem oversees menu development and
operations for Notch8 Restaurant, In-Room Dining and Banquet operations in the hotel. His previous
position was with Fairmont Vancouver Airport where he held the position of Executive Chef from 2016 to
2018, North America’s top airport hotel and international gateway Ask Burslem about his food philosophy
and he will tell you ‘simple is best’ and to ‘learn to use what’s around you’. You could say that his interest
in cooking started from a love of scones. He was taught his way around the kitchen from his mother who
baked scones with him regularly as a child. ‘Growing up, Saturday breakfasts were always about the
family cooking together’, Burslem proudly shares. Burslem’s career choice was sparked by a part time job
he held at The Four Seasons Hotel in Vancouver which prompted him to enroll at the Vancouver
Community College Culinary Program. Following his graduation in 2005, he worked his way up the
culinary ladder in a variety of progressive culinary positions in Vancouver at the Four Seasons Hotel, the
Marriott Pinnacle, Fairmont Waterfront, and in Seattle, WA at the Fairmont Olympic Hotel. He spent three
years in Seattle making a name for himself as Chef of the award-winning AAA Four Diamond Georgian
Restaurant at Fairmont Olympic Hotel, and also garnered the hotel’s Leader of the Year in 2011. In 2012,
he returned to his hometown of Vancouver as the Banquet Sous Chef, and was promoted to the position
of Executive Sous Chef at Fairmont Hotel Vancouver where he helped to oversee the opening of Notch8
restaurant, and The Roof, a pop up restaurant. His assistance was also called on for the opening of the
Richard Sandovals restaurants at Fairmont Mayakoba, Fairmont’s corporate F&B 2020 initiatives, and the
Fairmont North American Food and Beverage Conference. As Executive Chef at North America’s top
airport hotel, Burslem was able to showcase the fresh and unique local ingredients the Pacific Northwest
offers as well provide sustainable choices to the weary traveler in a comforting way. Recognition for his
leadership and development of the Hotels F&B offerings again garnered him Leader of the year for 2016,
Chef Burslem was recognized in 2017 for his passion by being invited to Paris France to take over the
company’s flagship restaurant The Bird. In early 2018 Chef Burslem took on the task as Regional Leader
for Fairmont Hotels in the area of food waste and sustainability. Leading a team of 12 he is responsible
for achieving a goal of 30% waste reduction by 2020 and hitting numerous other targets like cage free
egg offerings in all hotels, removal of inverted sugars and offering hormone free meats as an option on
menus. His passion for doing “what is right” is not just a choice but a lifestyle that will have impact for his
children and future generations.