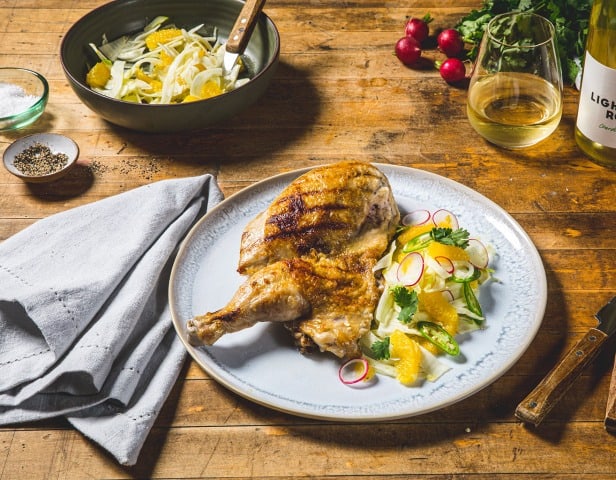 How To Make It:

Halve the chicken and debone the legs and thighs.

In a large mixing bowl, combine the citrus and ginger and salt. Whisk to make sure the salt is fully dissolved. Place the juice mixture, jalapeño, and shallots in the bowl of a food processor or blender, and lightly pulse to combine until smooth.

On a grill or grill pan over medium-high heat, cook chicken to char, about 7 minutes uninterrupted. Transfer charred chicken to a baking sheet and place in the oven until the internal temperature reads 165°F, about 15 minutes.

Remove the chicken from the oven and allow to rest at room temperature for at least 10 minutes.

In a large bowl combine the fennel and orange segments.

In another bowl whisk together the apple cider vinegar, orange juice, olive oil, sugar, salt, and pepper, until well combined. Pour over the fennel and massage gently with your hands. Let sit to combine while the chicken is resting.

To serve place a generous amount of fennel slaw on bottom of plate, place chicken on top then garnish with cilantro, radish and jalapeno. Pair with a glass of Lightening Rock Chardonnay.