“Our wine and grape industry is seeing phenomenal growth thanks in large part to the provincial government’s BC Liquor Policy Review and subsequent recommendations,” said Miles Prodan, President and CEO of the BC Wine Institute.

The figure comes from the recently released report “Canada’s Wine Economy – Ripe, Robust, Remarkable”, authored by Frank, Rimerman and Company. The report notes that Canada’s wine and grape industry is burgeoning having grown 33 per cent since 2013 to $9 billion of which BC’s contributes 31 per cent. BC is Canada’s second largest wine grape producing province next to Ontario in terms of acreage, tonnage and wine grape sales.

“What is impressive about these numbers is that most BC wineries and grapegrowers are small, family-owned agri-businesses (farmers),” adds Prodan. “These small businesses are creating 12,000 full-time BC jobs.”

For every dollar spent on farm-to-glass 100 per cent BC wine in British Columbia, $3.40 in gross domestic product (GDP) is generated across the province. Each dollar spent on imported wine generates just $1.43 in provincial GDP.

During the BC Government’s Liquor Policy Review, British Columbians, including consumers, labour, health and industry advocates, added their voices to one of the broadest provincial engagement processes in BC history. The resulting report provided a roadmap to liquor modernization through its 73 recommendations. Of those recommendations, 65 have already been implemented including allowing 100 per cent BC wine sales at local farmers’ markets and on select grocery store shelves.

“BC’s wine industry is continuing to grow due in part to a strong working relationship between vintners and government,” says Coralee Oakes, Minister or Small Business, Red Tape Reduction, and Responsible for the Liquor Distribution Branch. “Together, we are working to expand this important sector of our economy and culture, help businesses grow and increase consumer choice.”

“BC wine consumers, by whom the industry survives, have determined that BC’s liquor policy modernization makes sense and delivers the convenience and choice for which they asked,” said Prodan.

In addition, the economic report showed that 1 million tourists visited BC wineries in 2015, generating $600 million.

The BC wine and grape industry is certainly ripe, robust and remarkable. 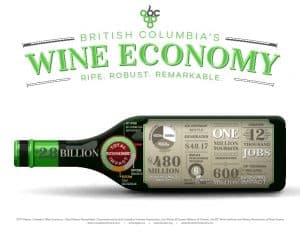 Complete findings of the study can be found in the research report, Canada’sWine Economy – Ripe Robust Remarkable.